Recently retired Aviagen veterinarian Carolyn Miller DVM, MAM, DACPV was welcomed into the prestigious Hall of Fame of the Tennessee Poultry Association (TPA) during the TPA's annual meeting on Aug. 3 in Nashville, TN. TPA uses the award to recognize those who have dedicated their careers to making significant contributions to the Tennessee poultry industry.

Dr. Miller became a member of the TPA upon moving to Tennessee in 1994 as a way to build and strengthen her connection to the industry. Since then she has been an active contributor to the success and growth of the TPA in its mission to promote and protect the industry, and be a "collective voice for the Tennessee commercial poultry sector in support of promoting education, policy and public relations for the sustainment of our industry."

Lifetime of commitment to poultry industry

During the meeting, Dr. Miller was interviewed by TPA Board Member Bart Smith, as together they looked back on her long and productive career in the poultry industry.

She joined Aviagen in 1994 as breeding program veterinarian and laboratory manager in Crossville, TN, where she managed the health programs of Aviagen's pedigree breeding programs. Before moving to Tennessee, she worked as a poultry veterinarian for the Missouri Department of Agriculture, and also a lab technician for Sterwin Laboratories in Springdale, Ark.

After her retirement in May, Dr. Miller continues to serve the poultry industry as a consultant.

"I'm both humbled and honored to be received into the TPA's Hall of Fame. During my 24 years of membership, I've seen the organization grow and succeed, and I feel great about the progress it has made toward the development of the poultry sector in Tennessee". Dr. Miller

She went on to speak about her more than two decades of service to Aviagen and how she has reached her professional ambitions.

"Throughout my career, I've aspired to work toward goals that make a difference. My time with Aviagen has enabled me to contribute in the areas of poultry biosecurity, health and welfare, which are essential to providing the world with a reliable source of protein, and I look forward to years of continued service to the industry."Dr. Miller

"I'm proud of Carolyn for being awarded by the TPA, and know that she is very deserving of this recognition. She has been a true friend to the industry, dedicating her life to improvements that have made a positive impact on the health of our birds." explained Dr. Kate Hayes, Production Program veterinarian for Aviagen North America

TPA inducted industry icon and friend, Fred Cespedes, into the TPA Hall of Fame on Aug. 6th. Fred, along with his wife, Holly, were both present to proudly accept this recognition during the Annual Meeting & Summer Getaway awards banquet, held at the DoubleTree Downtown Nashville.

Fred retired from American Proteins, Inc. in 2013 after beginning his career with the company in 1979. While in school in Miami studying to be an accountant with no interest in poultry at the time, he started working at night at a nearby rendering plant to help support his young family. He quickly impressed the management with his many talents and was moved into a position within the plant. Two years later, Fred and Holly moved to Amarillo, TX where he served as the plant manager for Amarillo by-Products, a division of Beatrice Feeds. In 1979, he moved his wife and three children to Cullman County, AL and took over management of a plant that had just been purchased by American Proteins, Inc. of Cumming, GA. Under Fred's leadership, the Hanceville, AL division, which supplies pet food manufacturers with protein, grew to be the largest poultry rendering operation in the U.S. To no surprise, this plant additionally won numerous environmental awards under his leadership.

Fred has been very involved with the poultry associations and activities in Tennessee and Alabama throughout his career. Most notably, he has served on the Board for both the Tennessee (2008-2011) and the Alabama Poultry Associations, and he served as President for Alabama in 2009. His energy, direction and involvement has been greatly noted and respected by all. During this time, Fred is greatly credited for his many contributions in planning and executing the fundraisers in Tennessee that are so vital to keeping the Association moving forward.

Fred has additionally served on the Alabama State Board of Agriculture, has been president of the Alabama Feed & Grain Association, and he has done some really great things for Wallace State Community College. Being recognized as the 2007 Cullman County Distinguished Citizen therefore comes as no surprise, and he is very active with the Cullman Rotary Club.

TPA is proud to have Fred Cespedes as their 2016 Hall of Fame Inductee and is most appreciative of his and Holly's support of the poultry industry in Tennessee over the years.

Mr. Bill Baisley Inducted into the TPA Hall of Fame (2015) 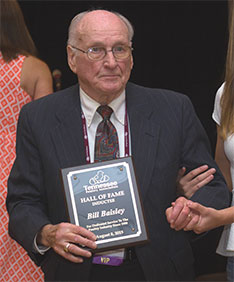 Mr. Bill Baisley of Dayton, TN was inducted into the Tennessee Poultry Association's Hall of Fame on August 8th during their annual awards banquet ceremony at the Hilton Nashville Downtown. Bill received a standing ovation from everyone in attendance while receiving recognition in honor of his lifelong commitment to the poultry industry. Bill was proudly introduced and recognized that evening by Mr. Don Crawford, TPA's 2014 Hall of Fame inductee. Bill and Don first met and became great friends while both attending Tennessee Tech in Cookeville in the mid-50's.

Born April 13, 1932 near Crossville in Cumberland County, Tennessee, Bill first met his future wife Maxine while he was in sixth grade. After Bill graduated from Cumberland County High School he attended TTU for a year. He then moved to Ohio to catch up with Maxine and they married on Nov. 9, 1953. Just ten days later on Nov. 19th, Bill was drafted and soon departed to Ft. Jackson, FL to serve in the Army for two years. He was transferred to Ft. Hood, TX and gained invaluable organizational and management skills as he moved his way up to becoming the Senior Clerk to the Battalion Commander for the 634th Armored Infantry Battalion.

After being discharged from the Army, Bill returned to TTU on the G.I. bill and completed his degree in Ag Education. Along about 1959, Bill started working for Mr. Tilford, Sr. with the Dixie Grain Company in Shelbyville as their Feed Salesman & Technical Service Representative for the Jamestown, TN area. A year later, Bill became the Live Production Manager and Assistant Manager for Dixie Home Feeds and lived in Athens, AL. Interestingly, Bill used to call on Pop Burnett (2013 HOF inductee) in Morristown "using an old fashioned adding machine to conduct business". From 1964 to 1966 , Bill served as the General Manager for Erving Hatcheries (Winlock, WA) at their Southeast Office in McMinnville, TN, covering the states of TN, AL, IN, IL & KY.

It didn't take Bill long to come out of retirement and find something else to do for he then moved to Dayton, TN (where he presently lives) and started working part-time in 2004 for Whiting Farms (out of Delta, CO) as a Sales Manager, and later (and still to the day!) with TN Mountain Shavings & Wood Co. for their plants in Evansville and Pikeville. Bill and Maxine have two children, Tim and Vivian. Tim has special needs and his parents are very proud and caring for him, the way it should be. Vivian lives in Ooltewah, TN and is a Sales Executive for U.S. Holland Trucking which is owned by YRC Worldwide.

Bill's leadership and involvement with the poultry industry throughout his career has been most impressive. Most notably, he received special recognition by his peers from the Poultry Leader's Round Table during the 2002 IPE (International Poultry Exhibition) in Atlanta for his involvement from 1967 to 1980. Moreover, he served as the President for the Georgia Poultry Federation in '83-'84 and has been widely recognized by the GPF for his accomplishments and service over the years. As a champion horseshoe thrower, Bill, along with Jack Neighbors, used to coordinate and dominate the horseshoe competitions in the early days of TPA when the annual meetings were held at Fall Creek Falls.

Mr. Baisley is widely credited by those who know and admire him best as having that "special ability to make everyone he meets feel like a valued and appreciated human being". Over a glass of tea with TPA Executive Director Dale Barnett this past summer at the local diner in Dayton - where Bill was warmly greeted by everyone he knew when he entered - he was quick to acknowledge that his gift to get along with people is what led to the success that he had throughout his career. Bill readily acknowledges and greatly respects the start that Mr. Tilford gave him and for supporting him as he did. If you ever have the chance to visit with Bill, be sure to ask him the tales about the 1957 Ford that Mr. Tilford first set him up with, and the other cars that soon followed, and about some of his sales calls to see Pop Burnett.

Bill himself has been most fascinated to see feed conversions progress over the years, from what started out taking "12 weeks to grow to a 4 lb. bird" back in the 60's to what it is today. Watching the industry evolve from the days of bagged feed to that of fully automated feeding systems has been most intriguing for Bill, as has the progression from the days of coal stoves and hot air furnaces to modern ventilation systems. When asked what he foresees as the greatest challenge facing the industry today, he promptly states that to be food safety, especially as we move away from the use of antibiotics.

The TN Poultry Association proudly welcomes Mr. Baisley into the TPA Hall of Fame in recognition of his lifelong dedication and service to the poultry industry.